I haven’t blogged much in the last year. The release of the Annual National Assessment Results by the Department of National Education is so shocking that I decided to write a blog post, the only other alternative was bursting into tears and hiding under my bed.

Dear Angie, Chairperson of The ANC Women’s League, oh sorry the Right Honourable Minister of Education seems well pleased that the results are better than that of last year.  The average learner performance in literacy at Grade 3 now stands at 52%, compared to the 35% in 2011 - an improvement of 17%

Great stuff Angie but it still means that more than half of South African children in Grade 3 can hardly read.

Even more disastrous, if at all possible, is that Grade 9 pupils scored an average of 9% for Mathematics – but that is not the whole truth – Equal Educations analyses reveals for that only 2.3 % of them passed adequately (by 50% and more). The national average performance in language stands at 43% Home Language and 35% First Additional Language at this grade.

It means that nearly 80% of 15 year olds can barely count and nearly 70% can’t speak English fluently. Oh Angie, please tell me how are they going to be able to find a meaningful occupation when they finish school?

I heard Graeme Bloch a “senior researcher at the Mapungubwe Institute for Strategic Reflection” (whatever they reflect upon I dunno) on 702 stating that we "shouldn't lose confidence" as it is as bad in Spain and in Portugal - How bizarre - in other words it's OK for our children to be failing because kids in other countries are failing. No way.

Professor Sarah Gravett, the University of Johannesburg’s dean of education   believes that a poor foundation for maths at Foundation phase in primary schools and poorly trained teachers and language difficulties may have contributed to the results.  It is not a MAY - it is what it is!

Trevor Manuel, The Minister in the Presidency, (Whatever the hell that is) spoke at the launch of the "SA Child Gauge 2012", a report on children released by the University of Cape Town in October -

“The work we are doing in the National Planning Commission is about the next generation. It is about addressing the forms of inequality that run all the way through South African society, and that, in many cases, affects children, especially in vulnerable and rural communities."

Hey Trev - so what you're saying is we are writing off about three to four generations of kids now in their twenties that have passed through a dysfunctional educational system since 1990. With no work, no hope, no prospects. If you don't address the NOW there will be NOTHING for the next generation.

In excess of 50% South African youth are unemployed at present. This figure is increasing by at least 300 000 per year, a conservative estimate in my opinion. This is a time bomb waiting to explode and the clock is ticking.

The time for planning committees and talking about what needs to be done, and how long it will take to eradicate is way past its sell by date. If South African teachers are not equipped to teach go off-shore and hire teachers that have the skill and qualifications to teach the children and pay them handsomely.

Use online teaching programme delivery to get away from book based education to teach maths and literacy.  These programmes do exist and the connectivity infrastructure can already cope with online education – it’s been tested.  Downloading is slow but you’ll definitely achieve a better result that the dismal ones currently being achieved. 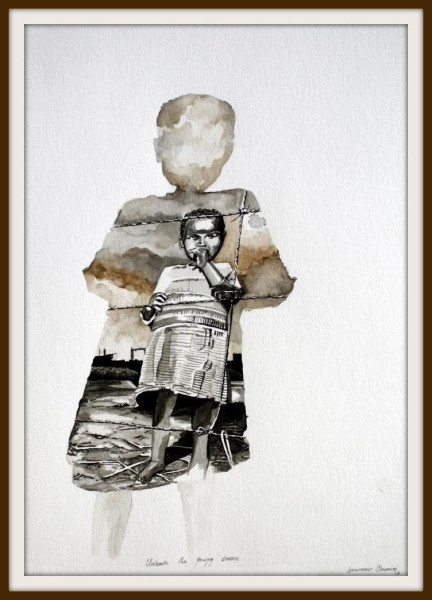 I bought his “Unleash a Young Dream” without even seeing the original –it captures the hopelessness and aspirations of South African children. It is a haunting work depicting a little girl trapped behind barbed wire and her larger shadow looming in the foreground.

When I saw it I thought of a statement by Emile Jansen of Black Noise in the must- see Laura Gamse directed documentary “The Creators” that explores the chaotic reality of modern day South Africa by peering through the eyes of its artists. Emile talks of how extremely difficult it is for the disadvantaged to break free from the bubble of poverty and become equal citizens in this beautiful country – even nearly two decades after democratic rule.

When I showed my ♥ Girl “Young Dream” she couldn’t understand why I bought the work. It’s entirely different from the rest of the art we’ve collected over the years which are filled with colour, happiness and vibrant life.

I told her that I bought it because it spoke to the disquiet in my soul and conscience - the iniquity of the fathers that’s being visited on the children and the children's children….but THE VISIT has become completely fucked up bestowing the shit of Apartheids rule on all children.

I hanged Hloni’s work in my study to remind me of what needs to be done. The young dreams if this country must be unleashed to ensure a meaningful future for our children’s children under African Sky Blu.

Each year that passes another half a million young minds are ending up on the trash heap of broken dreams and promises as they are functionally illiterate and with no hope in hell to break out of poverty’s bubble in a society where job opportunities are almost non-existent.

The sad reality is that there is no way that We the People can rely on government to do what it right. Most White South Africans might think they’ve done their part by giving the country over to majority democratic rule.  It is now the responsibility of the New Order to clean up the mess Apartheid left behind and wave a magic wand supplying basic services, education, and health care to all citizens. There is a massive backlog and it’s a pipe-dream to put the responsibility on politicians that’s otherwise engaged.

I acknowledge that the New Order is largely corrupt, inefficient and so wrapped up in political power games and money making schemes that they’ve long ago forgotten about the children but that does not mean that we can abdicate the responsibility to be a catalyst to change.

Leave the politicians to play Age of Empires and Monopoly. I believe in an Army of One approach - Take responsibility for the education of ONE disadvantaged child; adopt ONE classroom, ONE school. I don’t necessarily mean financial responsibility but the transfer of knowledge and skills by on-going personal involvement in the lives of these children – If four million South Africans do this we can really make a difference.

We have a choice.

We can remain comfortably numb. We can hang around hipsterville. We can hide in the leafy suburbs. We can flit and skate on the surface of a shattered society and play blame games or really become engaged in doing a little bit. Not the flavour of the days stuff like LEAD SA or 67 Minutes for Mandela or Occupy Whatever or Stop Kony Shit.

Who remember these the week after?