“The sad reality is that the chances these youngsters who have passed Matric, but who are functionally illiterate and innumerate, will ever get employed is very low. Statistics and our experience show that if learners don’t get employed during their first few years of leaving school, their chances of getting jobs later decline dramatically. As the years pass their opportunity of entering the work world just get lower and lower,”
“Angie Motshekga's education claims - the true score”

Mandy de Waal: Daily Maverick – 27 January 2013
http://dailymaverick.co.za/article/2013-01-24-angie-motshekgas-education-claims-the-true-score
The class of 2013’s matric results were released early in January and our Angie seems well pleased with the pass rate of 74%, an increase of 3.7% on the previous year. Great stuff. Problem is that it means that most school leavers – now striving to enter the job market or further their studies - might not be able to do simple sums and are still functionally illiterate. It’s becoming more and more obvious that government’s education system is farcical which stacks the odds against matriculants finding meaningful employment. If I still had kids of school going-age I would rather home school them, or maybe send them to Albert Street school in Marshalltown – The Little School That Can.

The results achieved at the school, whose learners are largely refugee children are miraculous.

There’s no government support, they are reliant on donations and its and ongoing struggle to feed and clothe the more than 100 orphans who considers the school their home and only constant in their lives
.
Against all odds, Albert Street School class of 2012 of 35 learners achieved a 100% pass rate. Even more astounding is that these kids wrote the internationally recognized Cambridge O level exams which standards are far higher than that of the South African educational system.

All of them have university exemption.

Most of the kid’s short lives are filled with hardship and trauma before finding a safe haven under the care of Bishop Paul Verryn and William Kandowe, Albert Street’s principal. I employed one of the school leavers on a casual basis for a year end stock take in December. Nyson is as sharp as a tack. He fled from Zimbabwe barely a teenager, crossing the border into South Africa illegally trying to find work in the Musina area with farmers. His family was starving and he was desperate to find a way to support them. Eventually he found a job as a farm labourer for less than R50 per week. He got news that his mother died in Zimbabwe and when he wanted to attend the burial his kind employer dismissed him not paying him his wages.
But life under the rule of the right honourable Robert Gabriel Mugabe is harsh and he returned to South Africa, ending up on the streets of Johannesburg - and eventually on the pews of the Methodist Church in Hillbrow. Nyson wants to study Engineering, but as a refugee orphan – even with asylum status - has little hope of doing so as there is little chance for get financial assistance.

The miracles created by Principal William Kandowe and the teachers together with the kids of Albert Street are awe inspiring.   I often visit the school without prior arrangement and get the warm fuzzies when I pop into the library. This was opened more than a year ago converting a ruin into the Field of Dreams library. Kids are checking out books between classes, reading in the aisles, playing chess, doing homework and clamouring to use the Sunshine online reading programme.

The library and the two classrooms built with a little help of my friends is by far the most fulfilling project I’ve ever been involved in and the results being achieved keeps me involved. 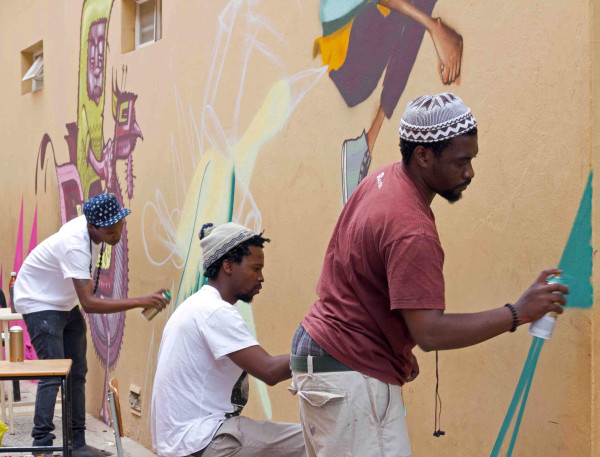 Graffiti archeology is a passion and I’ve built good relationships with a number of artists.  There are many detractors to this art form but I firmly believe that it has a role to play in inner city as well as rural communities. It brings colour and vibrancy onto drab walls in places denuded of beauty. It’s also a medium kids strongly identify with.

Towards the end of last year I asked Breeze Yoko,  an independent film maker and a prominent figure on the South African street art scene, to do a piece at the school.   Mid December I got a message that he’s ready to rock and to my great surprise he roped in some other well-known painters, HacOne which with Breeze are members of the Time Keepers Crew, and Fuzzy Slippers a Pretoria based painter. They created a beautiful mural on the outside of the library, generously giving their time, own materials and above all their ability to create magic on a wall acting as their canvass.  I watched them painting magical birds well after dark,  Breeze high on a rickety ladder muttering “I created a lot of work for myself” while painstakingly added fine details like the pattern on a jersey, or detail in a huge orange hairdo. There are now three murals at the school and a number of artists want to contribute their bit and the school will, over time, become a joyous riot of colour. Aaah Mrs. Rose how very wrong you were when being instrumental in removing the mural from that school in “The Village” without paying attention to what’s relevant and right in a modern Jozi – a melting pot of race and culture
.
Feeding the 100 orphan children attending the school remains a huge challenge. The ongoing contributions of Oresti Patricios CEO of Ornico Group, The Union of Jewish Women and the fruit and vegetables donated by Gastaldi Distributors in Pretoria have gone a long way to ease the situation.

I recently learnt about Reel Gardening and Reel Life, a revolutionary food gardening method refined and patented by Claire Reid. Reel Gardening has a proven track record in the establishment of gardens in disadvantaged communities. Seeds are planted in strips that are pre-fertilized which ensure that the seeds are planted at the correct depth and distance apart. Reel Gardens recons that their method saves up to 80% of water consumption.

This, as far as I’m concerned can be an ideal vehicle for the orphans of Albert Street to become more self-sufficient. I approached some of the donors that through the years have been unstinting in their financial support of Albert Street School. Mills Litho, The Union of Jewish Women and a private donor donated the startup capital. CARE GIVERS AT THE SOWETO FACILITY WITH REEL GARDENING'S CLAIRE REID & EMILY JONES
This morning we did a site inspection in Soweto and the soil for the first phase of a 400 square meter vegetable garden will be prepared over the next couple of days.

This will hopefully add another chapter to the inspirational story of the Little School that Can.