THE MAGIC OF MABONENG

"I contend that we are the finest race in the world and that the more of the world we inhabit the better it is for the human race. Just fancy those parts that are at present inhabited by the most despicable specimens of human beings what an alteration there would be if they were brought under Anglo-Saxon influence, look again at the extra employment a new country added to our dominions gives."
Cecil J. Rhodes, "Confession of Faith," essay included in The Last Will and Testament of Cecil John Rhodes,1902.

I stumbled on Arts on Main early in 2009 during one of my solitary inner city wanderings. This was long before Arts on Main became the lodestone of the über-cool, tragically hip and Spandexed bicycle hordes that now frequent the place in vast numbers over weekends and while participating in the monthly Critical Mass event.

This was once an area of bonded warehouses, fallen into disuse and occupied by the new immigrants looking for a place to stay, after the whiteys took the chicken-run or moved to the outer suburbs or Cape Town to get away from a blighted and beleaguered inner city.

I loved the beautiful courtyard planted with olive trees, the verdant lawn and the car of DF Corlett, a former mayor of the city in the 1930's on the roof. The lawn is now long gone, replaced with crushed stone as grass couldn’t handle the crowds.

Arts on Main was the first phase of property developer Jonathan Liebmann’s brainchild - the Maboneng Precinct (“Place of Light” in Sotho). This now spreads over a number of city blocks, and includes the 12 Decades Hotel, Main Street Life and Revolution House apartment blocks, The Main Change and more and more and more.
Since its genesis I’ve struggled to get my head around the Maboneng concept. I have a severe feeling of disquiet about the place, as it seems totally at odds with the surrounding City & Suburban area.

Graffiti archaeology is a passion of mine. Towards the end of December I photographed a new mural created, as part of the Acrylic Walls Project, by some heavy hitters on the international street art scene. It was a collaboration between Gaia from New York (rated as the world’s top street artist in the world in 2012 http://www.complex.com/art-design/2012/07/the-50-greatest-street-artists-right-now/), Know Hope from Tel Aviv and the Buenos Aires based artist Franco JAZ Fasoli. 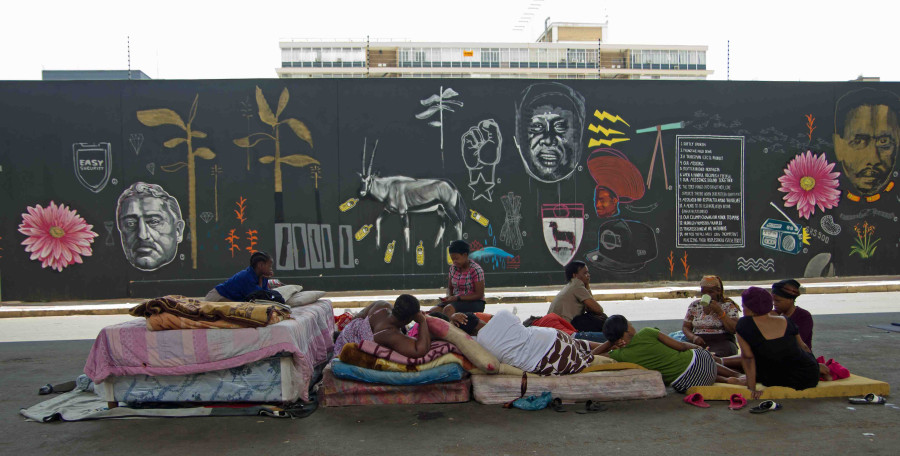 There were a number of homeless people stranded at the mural, under the overpass adjacent to Arts on Main. Apparently they were evicted from a pirated building in the area, while paying rent to a unauthorized landlord. As far as I know the fate of these poor souls had nothing to do with Propertuity, Liebmann’s company, which is developing the Precinct.

Why is it that the homeless and the dispossessed have to sleep under an overpass shortly before Christmas adjacent to a “model” inner-city development? What made it even more bizarre is that Gaia painted an image of Cecil John Rhodes on the mural in the background.

The street-art in Maboneng had been a contentious issue. This started with I-ART-JOZI, an event to which Johannesburg writers were not invited. Both I-ART-JOZI and Acrylic Walls was curated by the Cape Town based Ricky Lee Gordon.

I posted a remark on Facebook, stating that it was obvious that whoever created the mural had little sense of the history of Johannesburg and also my feelings about Maboneng. Ricky responded privately that, “the mural is full of symbolism of South Africa good and bad, sharing the heavyweight(s) of our history. This was all sparked by the fact that these people were living there”.

But the history of Johannesburg did not start with Cecil John Rhodes, the megalomaniac imperialist whose remains were transported thousands of kilometres by ox cart and train from Cape Town to his final resting place high in the Matopos in Zimbabwe. Who funded the Jameson Raid, sparking the Anglo-Boer War, so that he could get his grubby paws on the Witwatersrand Goldfields. Rhodes had little regard for the wants and needs of the indigenous populace in his quest to annex the whole of Africa for King and country.

The history of Johannesburg also predates the Voortrekkers who settled in the area long before gold was discovered on the Witwatersrand. The land was originally occupied by early groups of Tswana- and Sotho-speaking peoples and later in the 1820’s by the fearsome warriors of Mzilikazi. His people were forced to flee to Matebeleland after a number of bloody confrontations with Boer settlers. Mzilikazi was one of the greatest Southern African military leaders after the Zulu king Shaka.

However, this post is about Maboneng as a whole, and not just the mural. Although the mural does, in a sense, reflect the disconnect between Maboneng and its immediate surroundings. To a certain extent Maboneng is New-Colonialism that keeps on pushing away the people who occupied this space in the last twenty years calling it their home.

I’m in the city most weekends doing Urban Exploration. I trawl through Newtown in the west, through Braamfontein, the CBD, and beyond Maboneng to the east photographing graffiti, street scenes, city decay and redevelopments. I usually do this early mornings or late afternoon. The streets are relatively quiet and the light lends itself to better photography. In the mornings, the whole of Maboneng is like a ghost town with only the odd guard on security patrol.

Braamfontein is abuzz with activity at that time of morning. Redevelopments in this suburb are in an area that has always been a mix of residential, retail and offices. Newtown was great and lent itself to some great street art photography and catching the s8aterboys in action - unfortunately this area has been destroyed by the recent developments around the Old Potato Sheds.

This last year or so I have hardly ever gone into the Precinct except to photograph street art early mornings or late afternoons.  The hype of the place has lost its shine for me which was exacerbated when I was stopped from taking photographs in Fox Street by security one Sunday as it was “prohibited by the owners”. I posted my views about this incident on Maboneng’s Facebook page and they apologized for the misunderstanding. That’s fair and fine but I am still wondering how the residents of the surrounding area are treated should they dare to walk down Fox Street in the middle of a Loincloth & Ashes fashion show or other “Urban African Experiences”

I am not an expert on inner city developments, and I admire Liebmann and his crew for the guts and vision they have in Maboneng. Unfortunately, in my opinion it is totally out of touch with its immediate surroundings as it does not cater in any way for the needs of residents outside the precinct.  Put a high security fence around it and it’s just another boomed security village like those one finds in the leafy suburbs.

Maboneng’s website is slick and user-friendly and features a video clip where Liebmann explains his vision – “It is the creation of and development of an enlightened community, ........but also the creation of a new lifestyle, a lifestyle where people can engage on a proper urban African level”

In a TEDX video he compares Maboneng with the 44 Stanley Avenue development in Jozi’s Milpark area which also mostly caters for the creative market – the difference is that Maboneng was created in a vacuum. 44 Stanley started within an existing mixed use environment – close to the Milpark Hospital, a major hotel, the University of Johannesburg, the SABC, and AFDA and many high rise offices.

The Maboneng website also links to a Mail & Guardian article – “How the inner city got its groove back” http://mg.co.za/article/2012-11-02-00-how-the-inner-city-got-its-groove-back - and quotes Professor Keith Beavon; an urban geographer with an encyclopaedic knowledge of Johannesburg’s past, says of a tourist city:


“If you are going to want to make it attractive, you need a few gimmicky things that relate to the past,     present and future … packaged in an interesting way. Things you could do over five days — that’s as much as     any tourist spends in a foreign city.”

The aim of the creators of Maboneng is also to attract “extreme local tourists” living three kilometres away who haven’t been to the inner city for 20 years” This is where I get really confused – does Maboneng at its core cater for the middle and upper classes who seeks an “Urban African Experience” and tourists?  Is it a gimmicky thing that is packaged in an interesting way? Holy shit!

The Precinct is rapidly expanding, but in the process it’s moving further away from the needs of the immediate City & Suburban area. How long before it implodes and the fickle tragically hip find the next best thing? Liebmann says that Main Street Life has about 300 permanent residents in Main Street Life. I’m sure the with the apartment development in Revolution House and other spaces it might be say about a thousand at present. I also believe that it created a number of job opportunities but again, how integrated is Maboneng with the socio-economic needs of the local community?
On Maboneng’s website and in Liebmann’s video there’s reference to a “One Crèche at a time” project which does not form part of Propertuity’s portfolio but is an initiative of one of the Main Street Life residents. There is a Facebook page, a blog and from what I can gather there’s some work being done in two crèches.

I have been involved in education in disadvantaged communities for more than a decade and strongly believe that the needs of the inner city are as large as those in deep rural areas, and was interested to find out what work is being done. I phoned the number provided on the Maboneng website and the person who answered had no idea what I was talking about, saying they sell retail space.  Shruthi Nair, whose name is mentioned on the site, will be back in “about a months’ time” Ah well.

I am not the expert in inner city development; I did not have the guts, the vision or the money to even dream of starting a development like The Place of Light as Liebmann had.  I do however firmly believe that education is not only a basic human right for children but also a vital building block in socio-economic development and urban renewal.

To rely on government to provide education is well past its sell-by-date and it’s the responsibility of all citizens to be actively involved. If Maboneng only has some ad-hoc talks at the Bioscope addressing the issue of education, then something’s radically wrong with their model. Maybe there are other educational developments outside of the creative fields in place that I’m not aware of, and I sincerely hope there are.

I ordered “The Death and Life of Great American Cities” by Jane Jacobs which seems to be a landmark publication about urban renewal. She argued against urban renewal projects where the model seems to be at odds with the surrounding space -
“[The] most prevalent was and is the separation of uses (i.e., residential, industrial, commercial). These policies, she claimed, destroy communities and innovative economies by creating isolated, unnatural urban spaces.” 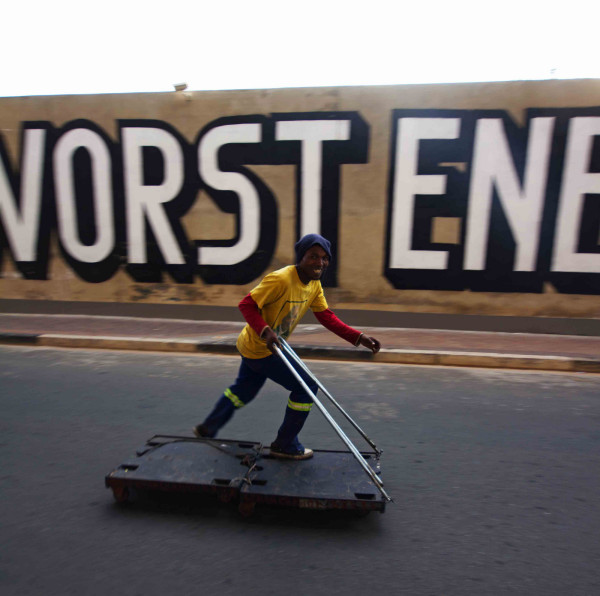 At present, in my opinion this is what’s wrong with Maboneng. I can hardly see the rag and scrap collectors cruising by the outskirts of the precinct each day to barter the leavings of the city, the back yard mechanics or the customers of Titties Furniture’s across the road in Main Street going for yoga classes in the Precinct or sipping wine in the shade of the olive trees on Any Given Sunday after buying a bed.